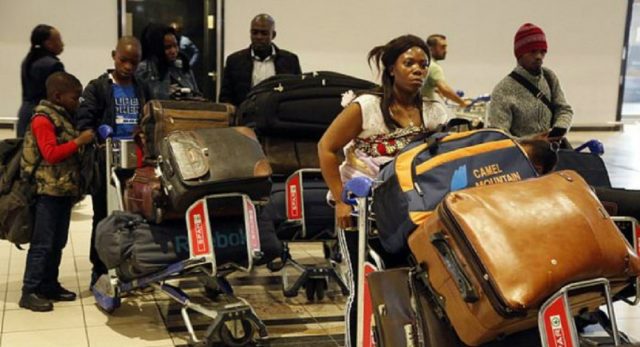 A Nigerian man who recently returned from South Africa has revealed that his South African wife fears visiting the country for fear of being attacked over the xenophobic attacks.

According to him, the couple who have been married since 2013 recently had a baby and due to her fears it was better she stayed back.

Speaking to The Cable he said, “She was scared to come because they know that the country is angry over what they are doing there so I wanted her to stay because she just had a new bady.”

He said his aged mother was on his neck and insisted that he return back to Nigeria.

The Punch reports that the second of 315 Nigerians arrived the Murtala Muhammed International Airport, Lagos. from South Africa on Wednesday at about 7:22 p.m.

The recent clashes have triggered a diplomatic rift between South Africa and other countries including reprisal attacks on South African businesses in the commercial city of Lagos and parts of Ibadan in Nigeria.

The BBC revealed that a special envoy from South Africa presented an apology to Nigeria’s President Muhammadu Buhari last Monday.

The envoy, Jeff Radebe, expressed the country’s “sincerest apologies” at a meeting in the Presidential Villa in Abuja.

“The incident does not represent what we stand for,” he said.

He also stated that South African police would “leave no stone unturned” in bringing those involved to justice.