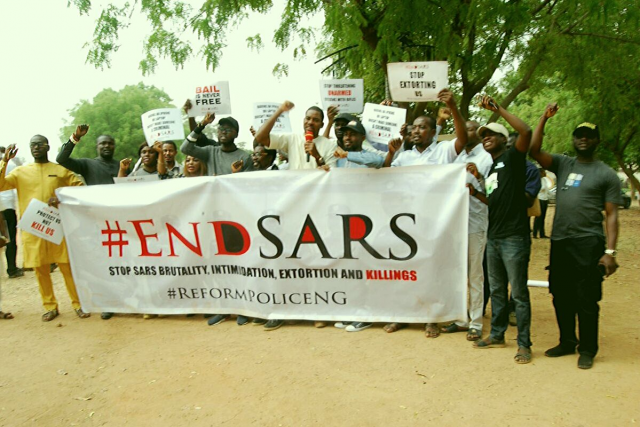 On Saturday, September 28, Toni Astro, a software engineer, alleged that he had been assaulted and extorted by members of the Special Anti-Robbery Squad (SARS). His story, which he shared on Twitter, triggered an outcry. Many respondents called on the government to deal with rogue SARS offers; others demanded that the special unit be scrapped.

In time, the hashtag #EndSARS began to trend on Nigerian Twitter.  Users of the platform recounted their own ordeals at the hands of the police force. Many of these stories came from software developers, who complained that they were being harassed by police.

Startup founders rallied the local tech community to take their grievances to the authorities. There’s been talk of meetings, and even funding for a movement to end police brutality against young techies.

For a while, the #EndSARS hashtag topped the trends list.

At the time of writing this, something else has become more important to the Nigerian Twitterati. A reality TV show, featuring cat-fights and basic spelling errors, is now number one. Apparently, the heavy issues have been dealt with.

Not really. They are still staring us in the face.

The SARS officers who allegedly harassed Toni Astro have been arrested. But hundreds like Tony Astro, who have been molested by security agencies, have not gotten the same sort of attention for their plight.

Since the Toni Astro debacle, many more have been attacked. And even more will be abused unless the police cease to be overbearing in its interaction with private citizens.

Escape from Reality, Via Reality-TV

Unfortunately, the section of the country most victimized by this problem- the youth –are too engrossed in reality TV shows and showbiz gossip to bother with pushing for a change in the way the police treats them. Outside of the relatively small tech community, concern for police brutality and extortion has remained momentary and passive.

Dr. Joe Abah, a well-known figure on Twitter, had this to say about the situation:

“You try to be big brother to Naija youth but they prefer #BigBrotherNaija. You trend #EndSARS to protect them, although SARS will never harass you the way they harass them, but they prefer to trend #ReleaseTacha. As many parents often ask, ‘At what point exactly did I go wrong?’”

You try to be big brother to Naija youth but they prefer #BigBrotherNaija. You trend #EndSARS to protect them, although SARS will never harass you the way they harass them, but they prefer to trend #ReleaseTacha. As many parents often ask, “At what point exactly did I go wrong?”

To put this in context, Dr. Abah, a middle-aged man, is pointing out that the fight against SARS brutality is being led (in part) by people from his generation. But a huge fraction of Nigeria’s youth (on Twitter at least) are not as concerned, despite the fact that it’s they who suffer it the most.

He came under fire for pointing this out. The accusers? Young people, the very ones he was trying to help out by speaking against police misconduct.

An Advantage Being Wasted

Nigerians aged 19-39 make up about 25% of the country’s population, according to the Nigeria Demographic and Health Survey (2013). That’s a big fraction in anyone’s books.

It’s a proportion big enough to change laws and determine election outcomes. It’s also enough to sink a country literally by doing nothing.

Nigeria’s young people aren’t inactive. They are learning at universities and polytechnics, hunting for and landing entry-level jobs, starting their own businesses, and bringing up new families.

But many of them are inactive in the things that make a country flourish. One in every three young Nigerian is unemployed. More than half have never voted. And worse, anecdotal evidence suggests that most are uninterested in governance.

But these ‘inactive’ young people come alive when reality TV gets turned on.

In 2018, one reality TV host claimed that over 170 million votes had been cast on his show in one season alone. Each vote would have cost the voter ₦30; small change for saving one’s favourite contestant. Unconfirmed reports suggested that the same show may have made over ₦5 billion from its viewers in one year.

These figures are staggering. They should also cause us to wonder. Many of these voters show no interest in the things that shape the direction of their lives (government policies for instance). But they are willing to spend hundreds of naira (from the little they earn) on multiple votes for contestants whose victories have no impact on their lives.

One explanation for this odd reality is that the youth have no idea what power lies in their hands. They have been told that governance and economic policy are the business of ‘politicians in Abuja’. They know that ‘government isn’t working’ and that ‘politicians are corrupt’. But they don’t know how these result in their being poor or unemployed.

Here’s another possible explanation: they do know about these things, but they have simply resigned to fate. They have thrown in the towel, deciding instead to drown their sorrows with celebrity gossip and Reality TV, as a disconsolate person might do with beer.

Except that ‘drowning your sorrows’ doesn’t take away the horrors that have caused it in the first place. And unless we confront those horrors head-on, even our Reality TV consolations will be taken from us. Then we will have nowhere else to turn.