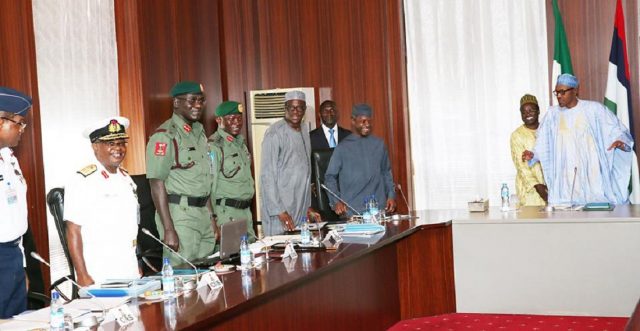 In December 2018, Boko Haram insurgents pulled a blitzkrieg on military formations in Baga, Borno state, sacking the headquarters of the multinational joint task force and taking over the place (briefly). The group steadied its onslaughts on military formations, killing many soldiers, weeks after.

At least, 18 soldiers were killed in an ambush on Maiduguri road on December 26, 2018, in one of Boko Haram’s mortal offensives. The group also persisted in inflicting attritive damages on the civilian population in the north-east. The killings and destruction never let up; in fact, they had taken an upward trajectory since the current service chiefs were appointed.

But what did President Muhammadu Buhari say and do in the heat of the killing of soldiers, civilians and attack on military barracks and equipment?

This is what he said in an interview on Arise TV in January, 2019 – a few days after the attacks:  “The head [him] has to be very careful on removal of the service chiefs because you don’t know [the] ambition of the ones coming up. I didn’t know them on [a] personal basis, I followed records and thought I picked the best then, of course, their performance may be disappointing but I accept responsibility for not changing them. My reason is based on my own experience.”

Now, compare Buhari’s complacent remarks to the action of President Issoufou Mahamadou of Niger Republic, who sacked his security chiefs after 89 soldiers were killed by terrorists in January, 2020.

My theory is, Buhari is keeping the service chiefs, who have failed in their duty, out of self-preservation. He is prioritising loyalty over competence because he still sees the wraith of the 1985 coup in which he was deposed. Boko Haram can sack the entire north-east, but the president will still keep the security chiefs. He considers any threat to his office of far greater concern than any threat to the lives of Nigerians.

In its resolution of January 16, 2020, the European parliament, legislative branch of the European Union, affirmed what many Nigerians know. It said there has not been any progress in the fight against Boko Haram insurgents.

Commenting on Boko Haram’s abominations, the parliament said the security situation in Nigeria has deteriorated significantly.

“Condemns in particular the recent increase in violence against ethnic and religious communities, including the targeting of religious institutions and worshippers. Deplores that progress has stalled in the fight against Boko Haram, ISWAP and the increased occurrence and severity of suicide attacks and direct attacks against military positions; recalls that Nigeria’s President Buhari was re-elected in 2019 on the promise of defeating the violent extremism promoted by Boko Haram and other terror groups, and urges the President to implement his campaign promises,” it said.

In these few weeks, the insurgents have executed a series of attacks on civilians and the military.

On Christmas eve, a faction of Boko Haram affiliated to the Islamic State, killed 11 Christian captives in Borno, saying the action was taken to avenge the deaths of Abu Bakr al-Baghdadi, the late IS leader and Abul-Hasan Al-Muhajir, its spokesman, who were killed in Syria in October.

On Monday, Lawan Andimi, chairman of the Christian Association of Nigeria (CAN) in Michika local government area in Adamawa, was tragically dispatched by Boko Haram. Also, Daciya Dalep, a student of the University of Maiduguri, was killed in the most infernal manner.

But how did Nigeria’s army chief respond to these tragedies? He described the attacks as the ”last kick of a dying horse”. But I wonder why this horse is not yet dead – even as the military claims the insurgents have been technically defeated.

Really, Boko Haram appears vitalised by every daring attack. On January 7, a driver attached to Olusegun Adeniyi, commander of operation Lafiya Dole (the war campaign), was killed in a derring-do attack by Boko Haram insurgents on the commander’s convoy.

The insurgents attacked Adeniyi, a major-general, who was on his way back to Maiduguri after a visit to Jakana in Borno state, where they had struck earlier.

What is derisory is that two of the service chiefs and the national security adviser are from the north-east – the theatre of the war. But rather than extirpate the menaces to the peace in the zone, two of the security chiefs are fixated on establishing military universities in their hometowns.

To me, it is clear the security chiefs have failed in the one task for which they were appointed. And I think, it is time they take a bow. In Old Japan, generals who fail in war take themselves out by hara-kiri.  Not that our own generals should, but the president must prioritise the security of Nigerians over himself and let these men go.