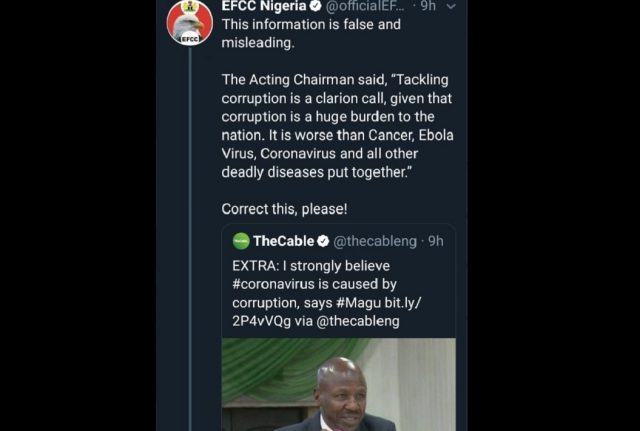 The Economic and Financial Crimes Commission (EFCC) is as flawed as Ibrahim Magu, its acting chairman, who has revised the agency to a personality cult. The foibles and defects of Magu are no longer distinguishable from the character of this once illustrious institution. Where Magu falters, the EFCC stumbles.

No doubt, a scathing detraction to professionalism in Nigeria is the customisation of public offices. Institutions are built around personalities rather than on rules, laws and service. This in itself is corruption.

In August 2019, the EFCC Twitter handle @officialEFCC tweeted a photo of some top staff of the agency tagging them ‘Magu boys’. I said then that this accented the execrable customisation of the anti-graft agency. As a matter of fact, it is the reason the institution functions with grave human frailties. That is, since the head of the agency is neurotic and compulsively ignorant the entire body has become necrotized.

This explains why the agency prosecutes suspects more in the media than in the courts. And why the EFCC acting chairman can declare that a suspect stole $2.5 billion before the pronouncement of a court. Also, why the operatives of the agency can invade nightclubs to arrest random fun seekers in the guise of hunting yahoo-boys.

Really, the reluctance of public officers to distinguish themselves from their offices is the reason abuse of office is rife here. There is Ibrahim Magu and there is the EFCC. Two separate entities. Personal foibles and interest must be detached from public office.

To say the least, it is a downing reality how individuals expropriate public offices, design them in their own image and build a temple in them for everyone to worship. This is corruption too.

On Tuesday, a leading Nigerian online newspaper reported that Magu said he is strongly convinced that corruption is the cause of coronavirus – the deadly disease ravaging China and threatening other parts of the world.

He said this at the passing out parade of 281 cadets of the EFCC Detective Inspector Course-5, at the Nigerian Defence Academy, in Kaduna, on Tuesday.

“EFCC has zero tolerance for corruption as our mandate is to kill corruption as corruption is worse than all the diseases we have now and I strongly believe coronavirus is caused by corruption,” he said.

In addition, in February 2018, Magu advertised the same unthinking ability and neurosis when he said cancer is caused by corruption at a meeting with the Independent National Electoral Commission (INEC).

But instead of the anti-graft agency to cower in utter shame over the unmitigated ignorance arrogantly displayed by its chairman, it took to social media to discredit the newspaper. Armed with video evidence and with its reputation at stake, the newspaper released the shame of Magu. This then set off a bazaar of reprimands, jabs and funny takes at the EFCC on social media.

A Twitter user, Lere Olayinka, took a heavy jab at Magu with a wry one.

He wrote: “Since Coronavirus was caused by corruption, I hereby move a motion that Ibrahim Magu of the @officialEFCC should proceed to China immediately to fight corruption in the country.

If you support, say YES.”

But Mercy Abang,  Nigeria’s ”journalism export”, spotlighted a snag in today’s media practice, where government actors seek to discredit media organisations and even go as far as denying their own statements.

She wrote: ”In this era where everyone tags a news story ‘fake news’ to discredit. If you don’t have a recording be assured that’s what you’d deal with. See what EFCC did? Do you all know the number Of Times Govt officials outrightly say things and blatantly LIE unprovoked?

“Thank goodness **the newspaper backed up that not just audio but video – some of you would have been sewing threads to abuse the media this morning. These people, only thing they say is LIES, all you regime supporters need to calm down a bit. Govt officials LIE that’s what they do.”

Really, lying is a congenital deformity in government actors. In fact, the capacitance for lying, creating alternative facts and deflecting the truth is the chief prerequisite to function in government here. So, why do we accord any credibility to the denials or counter statements of government officials? Sometimes, newspapers hold back in releasing evidence when government agents deny reports in national interest, and other times, out of fear of victimization.

We must not forget that the government is the biggest shareholder in the fake news factory. And any report that is not favourable to it, no matter how genuine, is fake news. Fake news is simply the story the government does not want published.

NWABUFO: What Atiku Can Learn From President Jonathan In Defeat