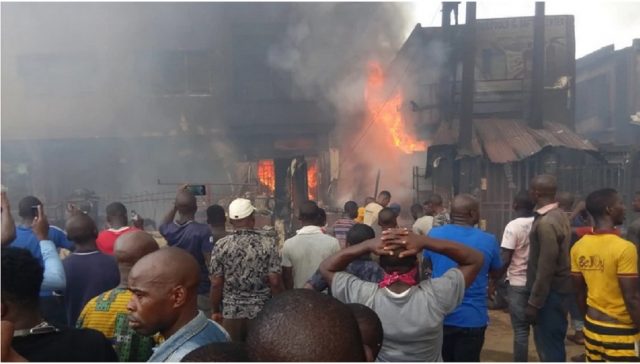 “This is one of the worst tragedies we have seen in recent times.”

That was a quote from a statement by President Muhammadu Buhari expressing shock at the tanker fire accident that occurred on June 2018 by Otedola Bridge in Lagos. In it,  he called on emergency services and law enforcement officials to do their best to reduce the damage from the incident which claimed at least 9 lives and left dozens injured.

I was in Lagos on the day of the incident and watched from my apartment as the rancid smoke went up in the air. Lives and properties were lost, never to be recovered.

As always, there was outrage. Hundreds of people wondered why a tanker containing inflammables should be jostling with other commuters on a busy day. Others asked why a sane society lacked efficient fire response services. Angry voices poured out their vexation as questions about the abnormality of the status quo.

Just 24 hours later, we were over it. The outrage was gone. We were back to normal. Our default setting, maybe.

A few days after that incident, I was on my way to the island from Ikeja. As usual, there was a gridlock on one of the major roads; and right beside the popular ‘danfo’ bus I took, was a tanker loaded with inflammables. There was deafening silence in the bus. No one seemed to notice what was going on or even connect the dots. We had become desensitized.

Apparently, the outrage a couple of days back only took a little while to subside. Both the government and the citizens were quite satisfied with the status quo. I thought to myself, “After all this is Lagos, we are all here to hustle.”

Fast forward to a year and we seem to have learnt little or nothing from that tragic incident.

“The fire in Onitsha yesterday is sad and regrettable. I am profoundly touched by the sight of the charred remains of an innocent mother and her child, who are victims of this tragedy,” Buhari tweeted while once again expressing grief and shock at the fire incident which occurred in last Wednesday in Onitsha.

The fire incident in Onitsha yesterday is sad and regrettable. I am profoundly touched by the sight of the charred remains of an innocent mother and her child, who are victims of this tragedy.

Just like the earlier incident along the Otedola bridge, the Onitsha fire was sparked by a petrol laden tanker. One witness told TheCable that the tanker lost control and exploded into balls of fire after ramming into buildings in the Upper Iweka axis of the city.

A mother and a child were burned beyond recognition. Traders lost their goods. Chaos ensued. And as always, outrage broke out across the nation.

About 48 hours after the incident in Upper Iweaka area of Onitsha, another petrol tanker exploded at Omaba Phase Two in the same city. The police said no lives were lost and the obstruction was quickly cleared.

The president made no statement about that. No outrage from anyone. It was an incident of little importance.

One can only ask where the problem lies. What is wrong with us as a people? Have we lost touch with ourselves that even the fundamental building blocks for a society can’t be put in place? All we have is outrage when something goes wrong but we soon lose the will or desire to fix anything.

The fire incident was avoidable. But perhaps it could only have been prevented in normal societies. Ours is an abnormal one.

A Twitter user said, “Yesterday’s #OnitshaFire outbreak is the worst in the history of the state. I’m heartbroken because in a sane area this conflagration is avoidable. To the traders that lost their goods, may U be comforted. To the departed, rest perpetual.”

Yesterday's #OnitshaFire outbreak is the worst in the history of the state. I'm heartbroken because in a sane area this conflagration is avoidable.
To the traders that lost their goods, may U be comforted. To the departed, rest perpetual.

Amid calls for the Governor of the state to resign, which happens only in saner climes, I began to probe at what the real problem could be. It isn’t that we cannot come up with better means of transporting fuel we know better ways. It isn’t that we cannot finance the fire service, which we want to believe we do. But it is that at the core of our malady is absent of the will to do what’s right.

The budget of Anambra State Fire Service from 2013 to 2019 shows an average of N100 million dedicated as yearly capital. Yet, none of the fire service team in Onitsha had water nor a good tyre to ensure effective response. The monies seem to have been swallowed by another phantom animal. We seem to believe that we can continue living in such a deception without no long term repercussions.

The president has called “on the Ministry of Transport, the Federal Road Safety Commission and other stakeholders to urgently address the issue of safety standards in Nigeria, with a view to stemming the frequency of these tragedies.” Calls like this have always gone out after every calamity. We call on the service chiefs to deal with terrorists after every attack. Yet, nothing positive happens. We call on INEC to organize free and fair elections. Yet, we have more of the same dubious elections. We call on each other to be responsible citizens. Yet, people demand bribes to carry out the very tasks they are employed or elected to execute.

Whether it is Lagos, Onitsha, Abuja, Port Harcourt, Kano or Kaduna, the refusal to take real actions to address real situations will only lead the people to a colossal wreck.

Almost a week after the Onitsha fire incident, I can only wonder if there is still outrage over the lives lost. I wonder if real steps are being taken to put an end to this deadly vice. I wonder if someday Nigeria would needlessly stop sacrificing the lives of people.

It is time to put an end to the outrage and get down to real business.

Perhaps even the reader has forgotten about the incident. Life goes on, right?