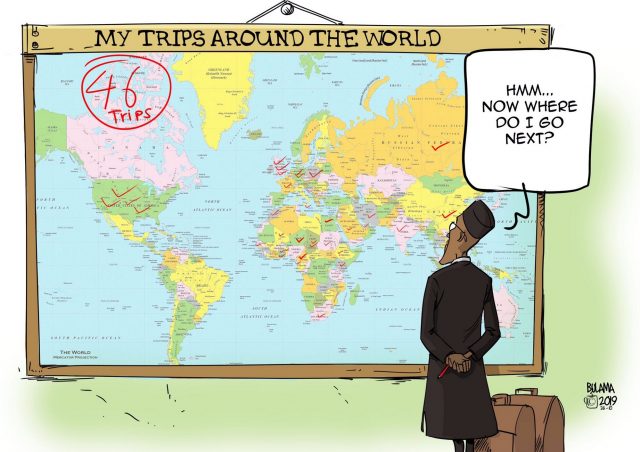 Much of politics is awash with hypocrisy. Whether it is members of a party hitting those of another over a ‘sin’ they will glibly commit or ignoring their failures while denouncing the others’, the practice has become the grotesque norm.

Earlier in October, a statement was published by the All Progressive Congress (APC) which was signed by its National Publicity Secretary, Mallam Lanre Issa-Onilu. The whole point of the release was to call on former President, Goodluck Jonathan, not to bother responding to statements attributed to the former British Prime Minister David Cameron. Cameron in his new book had accused Jonathan of rejecting help from the British Government to rescue the 276 Chibok school girls who were kidnaped by Boko Haram insurgents on April 14, 2014.

According to the statement, Jonathan had no defensible position because this was just one of the numerous corrupt practices under his government which were still being unraveled.

A member of the APC, Anifowoshe Titilope, further stressed the issue. “We may disagree on a number of issues in Nigeria,” she said. “But there is a national consensus on the fact that PDP elevated corruption to a national culture.”

Much of the campaign promises of the APC in 2015 was to curb corruption. The party assured the nation that they were going to root out the cancerous disease which had spread across board and had in fact become endemic in the system. To what extent that has been achieved, I leave the reader to adjudicate.

However, suffice it to say that a statement like this is a gruesome proof of the hypocrisy in our political discuss.

One does not have to be an erudite scholar in history to recall that a handful of those who make up the APC were once part of the PDP. Yes, the PDP might have elevated corruption but the APC is apparently perfecting it. Talk about the same empty bottles but with different labels.

I say this to set the stage for the crux of the issue at hand – President Muhammadu Buhari’s incessant global cruise.

Just few days to the end of his first term, The Punch published a report cataloging the time spent by the president out of the country. Apparently, he had spent a total of 404 days (a year and 39 days) traveling to 33 countries on four continents in his first four years in office. He spent 217 days in the UK receiving medical treatments and attending meetings of Commonwealth Heads of State and Government.

One can only wonder if the president takes governing serious. There is aplenty evidence that he believes touring the globe is the only way to get things done. Yet, earlier in October, he placed a tavel ban on ministers and heads of agencies to ensure a speedy defence of their proposed 2020 budget. Clearly the fact that others need to remain in the country and get things done does not apply to him. The hypocrisy is writ large.

Indeed it has been said by Buhari’s spokesman that today the president would travel to Riyadh, Saudi Arabia to attend the Future Investment Initiative (FII). After that, he is scheduled to proceed to the UK for a private visit. These new trips come just 2 days after a visit to Russia where he met with Russian President Vladmir Putin and other African leaders. Prior to that, there were visits to South Africa and Japan – just 5 months into this second term in office.

At the commissioning of a reference hospital in Katsina on August 15, 2019, Buhari stated that revamping Nigeria’s health sector could reduce dependence on foreign countries for medical reasons. But for one who has his doctor in London and the nation’s treasury in close proximity, traveling abroad simply depends on a statement.

In the midst of the numerous problems facing the nation: insecurity, hunger, unemployment and many more, the president’s safest bet is to take more time away from the country and his supporters egg him on. He seems to find it convenient speaking about national issues while abroad but retiring to an exile of silence while home.

While calling on parliament to pass his Brexit deal, UK Prime Minister Boris Johnson decried the billions of dollars spent by his government to travel to negotiation meetings in Brussels. But back home in Nigeria, the president isn’t fazed by the prospect of going on pointless trips with governors. Trips that at best procure loans that endanger the future of an already dying economy.

The APC would like us to believe that the PDP elevated corruption. Remember same bottles, different labels?  Chances are tomorrow the PDP will have its own touring president. Then it would be the APC preaching to us how wasteful and awful that is. We’re steeped in murky waters of political hypocrisy and the sooner we get out of it, the better.